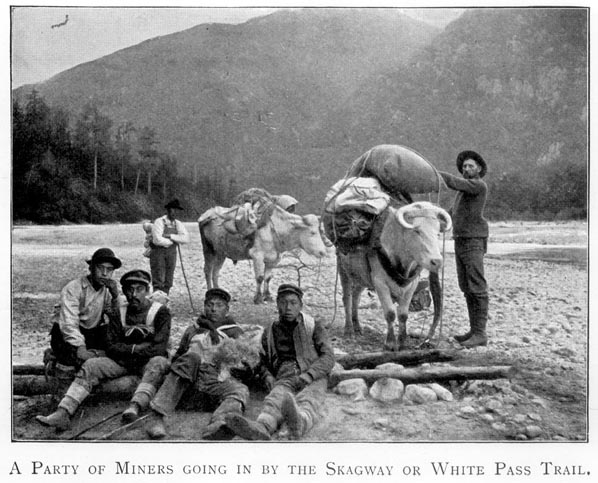 ​When Alaska is a part of a conversation in today’s world, that conversation isn’t always one about gold mining. But, in the 19th century, when the region was first owned by Russia, and, later sold to the United States, there were some people interested in the region’s natural resources. North America had experienced decades of expansion and exploration. During this time, many became wealthy from the discovery of the abundant natural resources on the continent. While Russia owned what would eventually become Alaska, gold was not sought after by them. Russia was desperately needing money to recover from its most recent war. They hoped to obtain some of that money from the United States by offering them the last piece of “mostly unexplored” North America. Exploration across much of the United States had just about been completed when word got out that Russia had sold the territory for two cents an acre in 1867.

​ Then Alaska became a U.S. Territory, the first prospectors from Canada and the United States could be found in the Southeast region. Gold was discovered just east of Admiralty Island in 1870. By 1871, prospectors had discovered gold in Sitka. Meanwhile, in Wrangell, a station had been set up for gold miners working in British Columbia along the Stikine River. 1

The next big discovery would eventually create the community of Juneau. In 1880, Joe Juneau and Richard Harris discovered placer gold. This led to the establishment of the Alaska Juneau Mining Company. The mining operations would continue in the Juneau area until 1944. The AJ Mine production peaked in the 1930’s, and 1941 was the last year that the mine saw a profit. 2

Alaska is well-known for a gold discovery that actually took place in Canada just prior to the 20th century. Anyone who has traveled through the Inside Passage has learned about the Klondike gold discovery and the Alaska “Boom-Town” of Skagway. It was the drop-off point
for miners headed north over Chilkoot Pass in Canada’s Yukon Territory, beginning in 1896. Historians have estimated that over 100,000 people, sold their belongings, and began migrating to the remote location in Northwest Canada in hopes of striking it rich. Unfortunately, less than half of these people reached their destination; and only a very small number discovered any gold. 3

Ironically, the Skagway community still prospers to this day as a result of the Klondike Gold Rush. It is a major stop in Southeast Alaska for those wanting to return to the late 19th century to experience the gold rush days that caused such a large influx of people to the Last Frontier even before the discovery of oil. ~ 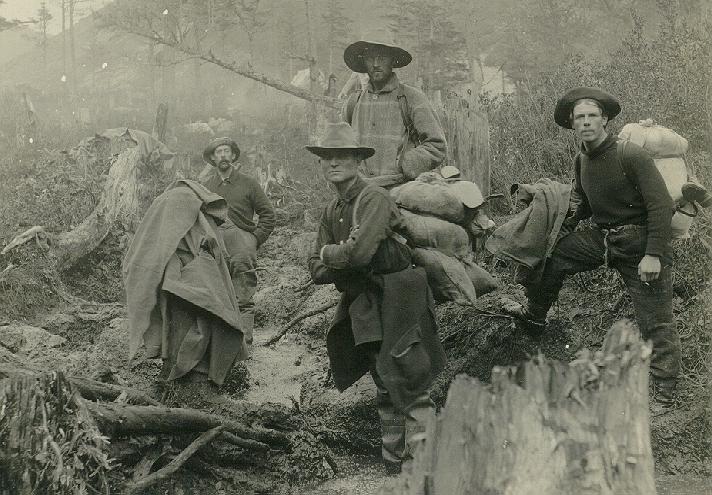 ​Some of the miners who didn’t have success in Southeast Alaska or Canada, reportedly went to other locations across Alaska while there still was time to find new areas to explore. Some ended up on the Turnagain Arm and the Kenai Peninsula. Gold had originally been discovered by a Russian mining engineer in 1848 on the Upper Kenai River. Larger discoveries would not take place until the late 1880’s and 1890’s, when prospectors  iscovered more gold along the Turnagain Arm and Resurrection Creek. In 1895, gold claims were made at Mill Creek, Six-MileCreek and Girdwood. During the next year, the gold rush had started to the Cook Inlet that numbered in the thousands. 4

The Cook Inlet prospectors were able to shovel heavy amounts of gold-bearing rock and gravel into long, narrow wooden boxes that were filled with water. These boxes, called sluices, had slats lying across the flow of water along the bottom. It was the slats that would catch the gold, as the water and gravel waste traveled toward the end of the box. The prospectors wanted this to be a quicker process so more gold could be mined. So, to speed up this
process, miners would later use hydraulics. This is where a high pressure water jet would be used to separate the rock in the sluice box. It required much more water. Plus, the system required the construction of long ditches along the hillsides above the mines in order to collect enough water for the process. 5 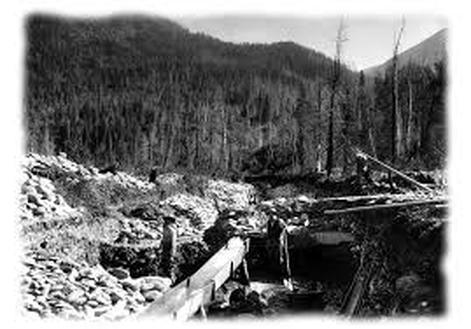 ​The community of Hope was settled on the south side of Turnagain Arm at the height of mining on Resurrection Creek. Sunrise was another community developed by the miners in the area at the same time that would become a ghost town after the prospecting ended. Both are located along the Hope Highway on the Kenai Peninsula. Hope continues to be a popular stop for tourists.

Another popular spot for tourists are the panning areas on the Kenai Peninsula for those wanting to try their luck searching for gold and wanting to learn more about the history behind gold mining in the state. There is the Bertha Creek Panning Area near the Seward Highway, just south of Turnagain Pass. Another panning area is Crescent Lake, located off of the Sterling Highway near Cooper Landing. Other panning areas are near Hope on Six-Mile Creek and Resurrection Creek. Both can be accessed by traveling down the Hope Highway. 6 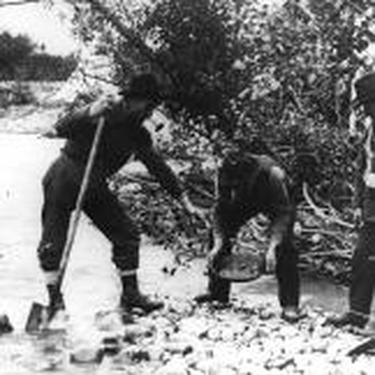 As the 1800’s were drawing to a close, gold prospectors who were still in Alaska would see one more major gold discovery before the start of the 20th century. Three prospectors, who were called the “Three Lucky Swedes”, found gold on Anvil Creek, near what would soon be called Anvil City, and then renamed Nome. Located near the Bering Sea in western Alaska, travel to this destination was limited. Ships and sled dogs were the main source for travel.
One year after the first discovery on Anvil Creek, the area had over 10,000 people living in its tent-filled community. When gold was discovered along the beach near the mouth of the Snake River, others would travel to the western side of the territory searching for riches. At the peak of mining activity, it was estimated that the region had a population near 20,000. The highest recorded population count was the 1900 census that showed a population of 12,488. 7

Nome was not the first gold discovery in the northern portion of the Alaska territory. Prior to the rush to Nome, there was a gold rush to the  interior in the Fortymile Region near Chicken.

Gold was first discovered here in 1886 on Franklin’s Bar on the Fortymile River. Miners prospected nearly every creek in the region, and eventually extracted more than a half-a-million ounces of gold. Those figures come from the Alaska Geological and Geophysical Surveys. 8